Wednesday, July 17 at 7pm: The Comedy of Errors

Shakespeare by the Sea is taking it’s show to the boardwalk area right next to muscle beach. Be sure to bring blankets and beach chairs.

“Venice, originally called “Venice of America,” was founded by tobacco millionaire Abbot Kinney in 1905 as a beach resort town, 14 miles (23 km) west of Los Angeles. He and his partner Francis Ryan had bought two miles (3.24 km) of oceanfront property south of Santa Monica in 1891. They built a resort town on the north end of the property, called Ocean Park, which was soon annexed to Santa Monica. After Ryan died, Kinney and his new partners continued building south of Navy Street. After the partnership dissolved in 1904, Kinney, who had won the marshy land on the south end of the property in a coin flip with his former partners, began to build a seaside resort like its namesake in Italy.

When Venice of America opened on July 4, 1905, Kinney had dug several miles of canals to drain the marshes for his residential area, built a 1,200-foot (370 m)-long pleasure pier with an auditorium, ship restaurant, and dance hall, constructed a hot salt-water plunge, and built a block-long arcaded business street with Venetian architecture. Tourists, mostly arriving on the “Red Cars” of the Pacific Electric Railway from Los Angeles and Santa Monica, then rode Venice’s miniature railroad and gondolas to tour the town. But the biggest attraction was Venice’s mile-long gently sloping beach.”  Click here to read more.

Join our generous sponsors and help us fully fund the show at Venice Beach’s Boardwalk. 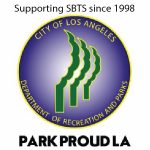